Cameron faces probe into links with Greensill at heart of government

Former UK prime minister David Cameron is facing a probe by an influential standards watchdog over his links to Lex Greensill, the Australian financier whose eponymous company collapsed this month.

The Committee on Standards in Public Life, chaired by a former head of MI5, has privately indicated that it will consider submissions made by the opposition Labour party on Monday following reports in the Financial Times and Sunday Times.

The media investigations revealed how Greensill was given an unpaid but influential role at the heart of government years before hiring Cameron as an adviser and using him to lobby senior ministers at the start of the pandemic.

Sir Alistair Graham, former chair of the standards committee, on Monday called for a “full inquiry”, describing the allegations as a “genuine scandal”.

The Labour party has written to the committee urging it to investigate how Greensill, a former colleague and friend of ex-cabinet secretary Jeremy Heywood at Morgan Stanley, was given a desk and a pass inside the Cabinet Office a decade ago.

In his role as an adviser on supply chain financing, which was never announced, he had access to at least 11 government departments, before he was given a formal role as a “crown commissioner” in 2014.

In 2012 Cameron signed off a loan scheme for NHS-linked pharmacies even though an official report had rejected a proposal by Greensill himself. Greensill Capital took over the running of the scheme in 2018.

The committee has also been asked to look at how Cameron, who was hired by Greensill in 2018, went on to lobby senior UK government figures including chancellor Rishi Sunak to get the company improved access to Covid-19 loan schemes including the Bank of England’s CCFF scheme.

Although the lobbying ultimately failed, Greensill had 10 meetings with Treasury officials in the spring of 2020 and secured loans through the Coronavirus Large Business Interruption Loan Scheme.

The FT first revealed on March 3 that Cameron had share options in Greensill that could have been worth $70m if the company had floated.

Shadow chancellor Anneliese Dodds and shadow Cabinet Office secretary Rachel Reeves wrote to the committee on Monday asking it to examine Greensill’s links to Cameron and whether the lobbying register, set up by the former leader’s government in 2014, was fit for purpose.

Reeves said the stories about Greensill were “extremely worrying” and part of a “growing catalogue of allegations of cronyism” by the Tory government.

“Taxpayers deserve to know the true extent of government access given to Greensill Capital through the former Conservative prime minister,” she said.

The lobbying register examined Cameron’s lobbying for Greensill last week, but concluded that the work fell outside its remit because he was an in-house lobbyist rather than a third-party agent.

The standards committee has no remit to investigate specific allegations about particular individuals. However, insiders told the FT that the Labour complaint would be included in a review by the committee into standards in public life, dubbed “Standards Matter 2”, which is due to report in the autumn. 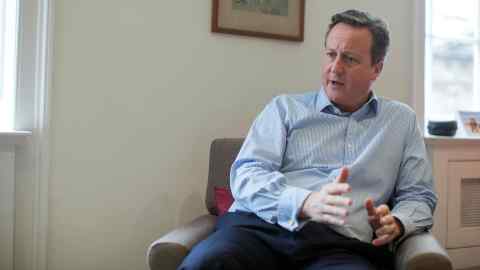 “The committee is at the evidence stage of its inquiry so Labour can make a submission to that and we rely on evidence so would welcome hearing from them,” said one person close to the organisation.

Despite lacking the ability to sanction individuals, the committee has influence over the government: its recommendations in the past have led to the creation of various standards bodies such as the “adviser on ministerial interests” and the Electoral Commission.

The standards committee — which is chaired by ex-MI5 chief Jonathan Evans and whose members include Margaret Beckett, a former Labour foreign secretary, and Jeremy Wright, a former Tory culture secretary — refused to comment on Monday.

Last week the committee took evidence from Eric Pickles, chair of the Advisory Committee on Business Appointments, who called for a “review of lobbying” in the wake of the revelations about Cameron.

Pickles, who was a Tory cabinet minister in Cameron’s government, told a hearing of the committee last week that it was important that lobbying should be “transparent and in the open”.